„On Saturday (21 March), the number of cases reached 367 with 14 persons in intensive care units, and 3 severely ill, public health authorities said. More than 4,200 people are in quarantine, while almost 55,200 are under monitoring in self-isolation.„

Far-Left and the hate against Christians. An American case

The Far-Left is the political ideology responsible for most crimes in human history. This is a simple and factual reality. One that the Far-Left is running away systematically. Either by using the most absurd excuses or by blaming “The Right” for its wrong-doings.

The absurd excuses are like “our political system was wrongly applied” (even if the system is so bad that anyhow can only bring disasters); or like “there were also some good things, not just the bad ones” (as if killer rapists can be excused because they talked nicely to the victims before the attacks or something like that).

Labeling the Far-Left as the Far-Right is very common and extremely efficient in misleading people.
Maybe the most famous cases are Nazism and Fascism, both forms of Socialism. Nicknames as “Nazism”, “Nazi”, “Natzy” and so on, are coming from the name National-Socialist Party. Yeah, this party has the “Socialist” word in its very name! Though, there are a lot of people – even billions – that believe, blindly, in the lie that “Nazism was a Far-Right doctrine”. Far-Right Socialism???
No, of course not! Nazist doctrine is a Left one, a Far Left one to be more accurate.

So it is the Fascist doctrine, made by Benito Mussolini, a leader of the Italian Socialist Party, a man expelled from Switzerland for his frantic Socialist propaganda. The political foundation of Fascism is identical to the Socialist one (class struggle and the other stupid ideas), for the sole reason that it replaces globalist extremism with nationalist extremism. Mussolini’s dream was of a socialist – or even communist – Italian empire (similar to Hitler’s dream…).

There is no reason – factual and logic – to declare these ideologies and groups to be “right” or “far-right” or “right wings” and so one. In order for the Far-Left to be absolved for what they did, what options do they have? It throws the responsibility on the political adversaries by putting the “Right” label on them.

(Attention! The fact that Nazism and Fascism were sometimes at war with other left groups is just natural for the Far-Left! One of the biggest political conflicts after the Socialist Revolution in the Russian Empire was the fight between the Bolsheviks and the Mensheviks; both being Far-Left.

In Romanian, under the Soviet occupation, the establishment of Communism was followed by a big hunt not just on the right and center adepts, but also on the all Socialists that not fit exactly on the Stalinist line. Etc., etc.) 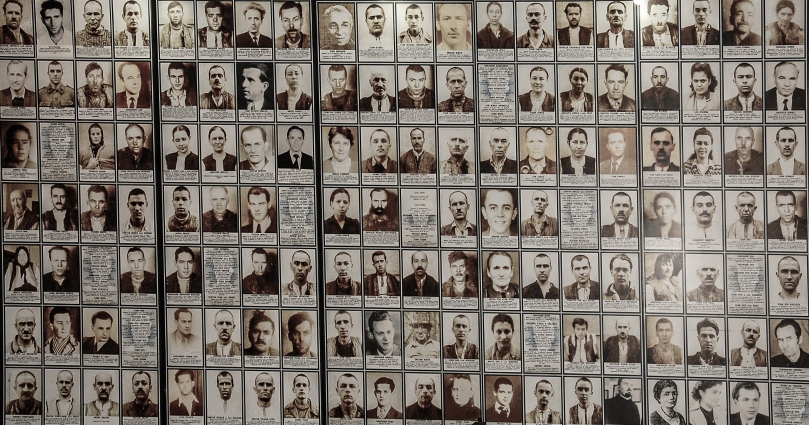 Just a few of the people imprisoned, tortured and killed by the Communists in Romania because they prey, they were Romanians and lived up to theirs Ancestors traditions

On 6th May 2019, in Philadelphia, Pennsylvania, USA, occurred an exemplary case that shows what the Far Left is. This represents one’s behavior, including both state and federal reactions.

A public employee of Pennsylvania State, named Brian Sims, verbally attacked people, repeatedly and violently, even using gestures on the border of physical assault. (Think of how you would feel if someone waved his arms in your face, eventually also waving an object at you) Who was assaulted by Brian Sims? An elderly woman and several teenagers. Why? Because he doesn’t agree with their opinions! Yes, it’s true! He bullied them because he doesn’t agree with their opinions!

Among the insults thrown to the elderly woman were some like „shame”, „shame on you”, „racist”, „disgusting” and so on.

Theoretically in Pennsylvania State, it’s not legal to punish someone for their opinion, unlawfully limit the right of free speech, or harass and bully someone for their opinions. Theoretically. However, Brian Sims took this even further! He did not just harass people again, three teenage girls in this case, but he even repeatedly offered money to anyone who could give him their personal data! This is, at the same time, a federal felony and incitement to federal felony. Moreover, Brian Sims offer escalates to: “Money for anyone who doxes these women and puts their lives in danger!”. This is again felony and incitement to felony, including incitement to aggravated assault.

What sanctions did the state employee Brian Sims receive for his wrong-doings?
None!
What?!!? A Pennsylvania State employee is bullying people on the street, is insulting women for their opinions and religion, perpetuating felonies and inciting felonies – even aggravated assault –, is even bragging about it, is publishing proudly his felonies and he is not punished or sanctioned in any way???!!!???

Because, unfortunately, in many places of the USA the system – the state – is under the control of Far-Left.

During the eighties of the former century, there was a joke in the communist countries of the Warsaw Pact:

“An American that wishes to see the future gives almost all his money to a cryogenics company. They freeze him and he wakes up after 100 years. He goes out from the building to the first bar he finds and asks the bartender: Who won the Cold War? The bartender stares at him for a second and answers: Of course, we won! Happy, the man asks for whiskey. The bartender gives him a glass and asks: Ten rubles, please!” (Ruble or rouble it was the money used by USSR.)

This joke has its roots in the fact that the USSR had an already old tradition of infiltrating the West in the eighties. The communist doctrine was spreading everywhere, under different covers – from “environmentalism” to “humanitarianism”. The Communists/Socialists themselves were sneaking everywhere.

Romanians that survived Gulag and came home in the sixties already prevented their friends and relatives about the fact that the Occident was the target of a systematic communist reshaping. Actually, even the correspondence between Lenin and Trotsky, far before the First World War, advocates this ideological and political-administrative conquering. For example, these letters present dissolute sexuality as essential for capitalist countries’ destruction. As a result, one of the first communist measures after the Socialist Revolution victory was the abolition of marriage, the legalization of sexual perversions (starting with homosexuality), the demand for “soviet women” to be disposable for the needs of theirs “soviet comrades” and so on. After that, using the Far-Left intellectuals from Germany, Austria, France, Italy, the USA, etc. they widely spread these communist ideas.
From “Sexual Revolution” (the dream of Lenin and Trotsky) to a lot of economical and social constructs, there was no limit to the communists’ influence.

One of the base rules of Communism is political correctness.

It doesn’t matter who you are, how much you did for the Party, Communism demands on you to always follow the Party line very strictly… or you will be punished, even eliminated. Trotsky is a dead example of this rule.
Deviations from the Party’s line were fundamental guilt, a threat that made the lives of billions of people a nightmare. They even have a name for this kind of guilt: deviationism.
For this guilt, there were no excuses except for the ones indicated by the Party. For example, you were able to find mercy if you declared yourself a victim of a saboteur, of a capitalist propagandist, who, “without your notice”, “influenced and manipulated” you. Preferably it was to indicate as a saboteur or capitalist propagandist a relative or a friend. This was to prove that you “love the Party” more than your family (bourgeois concept!) or your friends.
I will not go on with describing that demented world. Especially as it’s already taken the power in the formerly free countries.
And, no, it’s not a digression…
The Brian Sims case is exactly a live demonstration of applied Communism!
Or, in other words, of applied political correctness.

Why did Brian Sims receive no sanction for his delicts? Why his violation of free speech, his bullying, and his harassment of people based on their religion, gender and race, his felony incitement and so on, are not punished by the authorities?
Simple: he is politically-correct, and his victims are not!

Or, in other words, because the Pennsylvania State is now dominated by communist doctrine in thinking and, voila, in official actions.
More detailed?

Brian Sims, apart from the fact that he is a public employee, is also a Democrat (sadly, today a USA Democrat almost always means a Communist). Moreover, he is also homosexual. Therefore, he has political immunity. The perfect communist way!

On the other hand, his victims, belonging to various Christian denominations, were praying for the mothers who make abortions and for the children killed by abortions. All those being crimes for Communism! Therefore, even if the public employee Brian Sims himself admits that his victims’ doings were perfectly lawful, he punished them accordingly to Communist morale! And Pennsylvania State is supporting him!

For a better understanding, let’s imagine that some Christians – Catholics, Protestants, Orthodox, etc. – would do the same thing Brian Sims did. Going to some Democrats or some homosexuals and cry to them, shouting the same insults and using the same gestures. After that, posting on Twitter the same type of messages and videos as Brian Sims – of course, with Democrats or homosexuals as victims, instead of Christians.
It’s obvious that would follow a tidal wave of violent ripostes, from the legal ones to the ban from Twitter and so on.
The difference in response is categorically discriminatory.
It’s absolute proof of Communist persecution against Christians in the USA, today.

Like a peak of ridicule and communist insanity, let’s put here another page of Brian Sims’s actions!

Everywhere the USA (like in the whole world) the communist plague is expanding.
And under the most absurd pretexts, Christians are persecuted. Systematically.
At the same time, the bullies are treated with maximal clemency, if not even reworded.
We, the people from the former communist countries, are watching this with sad eyes and growing warry. What we are watching today in the USA is the same thing that happened in our countries in the past. And the consequences where terrifying.  And it’s happening again!

The majority of people from the USA are silent; and so are the people in the entire world. Like they were in the time when the Bolsheviks, the Nazis, and the Fascists come to power. In doing so, they become accomplices, by silence, with the expansion of Far-Left reign. Just like before the Second World War…

Here are some sources about the video-clip initially posted by Brian Sims, about other aspects of his actions, about his so-called excuses, etc. The readers must notice that the sources for this case are the videos and declarations of Brian Sims himself. The criticized actions and words are the actions and words that Brian Sims proudly presented to the world. The context is also presented clearly by the videos of Brian Sims. That’s the reason for the so-called excuses of the aggressor Brian Sims to the mother of one of his teenage victims. But it is not enough. Again, think of a man that is Republican or/and Christian, doing the same actions and using the same words and voice like Brian Sims against some Democrats or/and Non-Christian people – including teenagers. Just because the man thinks the opinion of those Democrats/Non-Christian people is wrong. I know, I’m repeating myself. But it seems necessarily, as the first American reader of this paper missed the point of the actions and declarations being produced by Brian Sims himself.

P.S. This is an essay first published in Romanian, here. If the translation is not good, I apologize for it; after all, English is not my native language and I’m not accustomed to write in English. I hope I will hone my skill in the time… Thank you for understanding, and, of course, for reading!